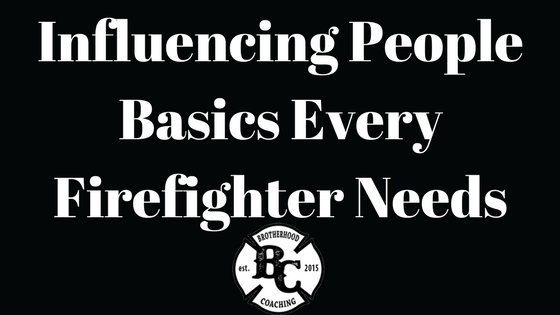 The basics that we need to help start influencing people and how to get rid of that negativity that’s going on.

So a real simple response to negativity is Misery loves company, so don’t engage in it.

It’s hard, you know, these might be simply answers, but they’re hard to do and that’s why most people don’t do it. The first thing is don’t go down the rabbit hole of negativity. Try and maintain yourself positive, especially if you’re the leader of a group because the minute you go down that negative route, your crew’s going to start following it. So the first step is you don’t go down that road.

A next step is start reframing some of the conversations with people focusing on what’s working as opposed to what is not working.

Busy crews rarely become negative. As I’ve gotten older, I’ve become busier. I have different concerns and different stressors. Little things that used to bother me in my twenties, I could care less right now. Go out and train in your first due area, learn your buildings, do some fire behavior videos, build some props together, whatever it may be. The busier you keep yourself doing result driven activities, the better off things are going to get. Well, Keep your crew busy doing stuff that’s actually making them better and feel good, so they feel accomplished after they do it. Not just, cleaning the station, no one likes busy work, but if it’s going to get us to a specific better result, we’re all on board, right?

A great start to help you become a better influencer is the book “how to win friends and influence people by Dale Carnegie”.

I read this many years ago and what I’m actually going to do right now is go through it and talk about some of my highlights. If we started to influence people as opposed to just making demands, we’re going to get much further.

It’s going take more work to influence others. That’s why most people just try to make demands and it’s actually a self inhibited when they go that route. So let’s, let’s get to some of these highlights to share with you guys.

They are just what we would be under similar circumstances.

if you experienced everything that person did, you’d be the same.

You’re dealing with people who were emotional creatures.

instead of condemning people, try to understand them.

Make the other person wants to do it,

the deepest urge is our desire to be important, to have an audience to feel valued,

The deepest principle in human nature is the craving to be appreciated.

positive reinforcement, honest appreciation, got results were criticism and ridicule failed. I

The next time you’re about to make someone do something, pause and ask yourself, how can I make this person want to do it?

Encouragement is much more effective teaching device than punishment is.

One major factor that motivated people was the work itself, so make it quality work and people are gonna want to do it. It’s much easier to get a guy to get satisfaction over, being delegated to put on a drill for his company as oppose to you’re in charge of making sure that all the trash got taken out today.

You will be the most effective when you lead by example. You must be the example for your people to follow.

I was asked once about how to keep my crew with good morale. Its a simple yet challenging task, you keep your own morale high.

Make sure to get yourself a copy of how to win friends, influence people. This is going to start the influence process for you within your fire house. It’s really going to help you level of your leadership and understanding that we get a lot further when we influence people as opposed to just making demands.

So, if you’ve got something out of this, share it with somebody else.